As we have been witnessed in recent days of March 2020, there were two occasions of raids on the Kaka`i (Yarsan) Cemeteries in Iraqi Kurdistan (Bashur). The inhumane acts of inhabitants residing in Erbil and then in recent days to cemetery (Hawash) in the Alisra of the Kirkuk Province.

Such actions are new, either for the Yarsans in general, and international human rights organizations, because in the past years and decades, there have always been similar acts other countries around the Middle East where Yarsan people lives.

Similar deliberate actions that are now taking place against Yarsan society and their tombs and cemetery in the Safia’s village of Erbil and Alisra in Kirkuk Province has repeatedly been used in the past years against followers of other beliefs and religions in Iran and neighboring countries, such as Turkey and Iraq..

The Yarsan Democratic Organization, based on the observance and implementation of the provisions of the Universal Declaration of Human Rights of December 10, 1948, can be promoted without distinction, especially in terms of race, color, sex, language, religion, political opinion or any other belief. 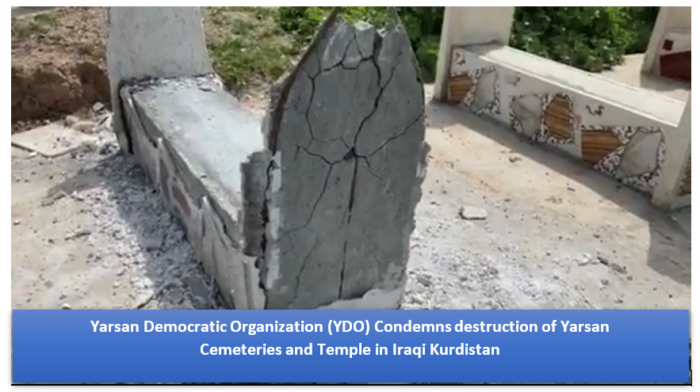 Yarsan Democratic Organization condemns any kind of aggression and interference to places, tombs, gathering and individuals and condemns attack on Cemetery of (Kaka’i) Yarsan village of Sefia of Erbil and Alisra in Kirkuk province in Kurdistan (Iraq)

Yarsan Democratic Organization also holds Iraqi Kurdistan regional government and Iraq’s central government responsible for maintaining the security of Kaka`i community in Kurdistan and Iraq. our organization therefore urges the Governments of Baghdad and Erbil to prevent the repetition of these medieval and non-civilized acts, and to call upon the security apparatus and institutions of the Kurdistan Justice and the Judiciary to seek and detect the commanders and perpetrators of the destruction of the Kaka`i tombs.

We also call on international human rights institutions to register and pursue these actions as a gross violation of human rights and dignity of the Yarsanis.